Myths and Facts – How Much Do You Know? 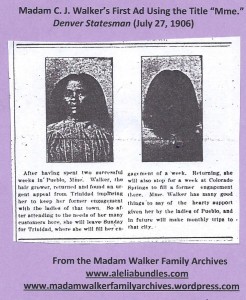 True or False?
1.  The North Carolina Mutual Life Insurance Company, one of the largest and most successful Black companies in the 19th century, was co-founded in 1898 by an African American barber with little formal education.

2.  By 1889, African-Americans had established a wide range of very successful small businesses in Philadelphia. True or false?

3.  It was difficult but not impossible for African-Americans to operate businesses in the South before the Civil War. True or False?

4. By the Civil War, the value of all free Black-owned establishments and personal wealth in the U.S. was valued at about $50 million; half of the wealth was based in the South. True or False?

5.  Apart from Madam Walker’s success as a millionaire in the early 1900’s,  there were a few millionaires in the industry until the passage of the Civil Rights Bill.

6.True or False? During the Depression, Bank of America was the only bank in the country to open a branch in a segregated Southern city. And that bank kept almost all Black-owned businesses in that area from going under.

Answers
1. True
2. True
3. True
4. True
5. False. Madame Walker is a popular historical reference used repeatedly by the media, which tends to ignore the business success of other people of color attained during the historical period in question. And after passage of the Civil Rights Bill, “African American businesses [were caught] in the middle of a number of [political conflicts] ideas and programs…When the [bill] was passed, there was a gap in…the existence of  black businesses…entrepreneurial activities would lay dormant until the early 1970’s.”
6. True and false. The circumstances described are accurate but the institution was not Bank of America but Mechanics and Farmers Bank, an institution founded by North Carolina Mutual…