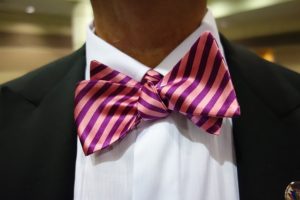 Think back to when you were growing up.
What were your most memorable and positive experiences at home, school, or at after school events or social gatherings? Did someone you observe leave a lasting impression? If so, in what way?Can you make a checklist of your recollections? Might there be a business idea hidden in your answers?

Florida administrator, entrepreneur, and community leader Efferem Williams grew up in the South and observed how his cousin, nicknamed GQ, had a style for fashion and ties that set him apart from others in their church.

By age 10, Williams started wearing stylish ties to school on a regular basis. And twenty years later, he and his cousin launched a business that designs and markets, exclusive designer, silk neckwear, including prized bowties.

Today with the help of his preteen son and daughter you can’t help but detect the makings of more budding entrepreneurs. They have contributed names for the ties, such as Brown sugar, Lemon drops, Dreamsicle, and Charleston Lime among many others, reports the Florida Times-Union.

Takeaway lesson: Childhood experiences often hold the key to successful ideas and point to personality traits that may signal entrepreneur. In the case of Efferem Williams, How many 10-year-olds would decide to wear ties or bowties to school…every day?